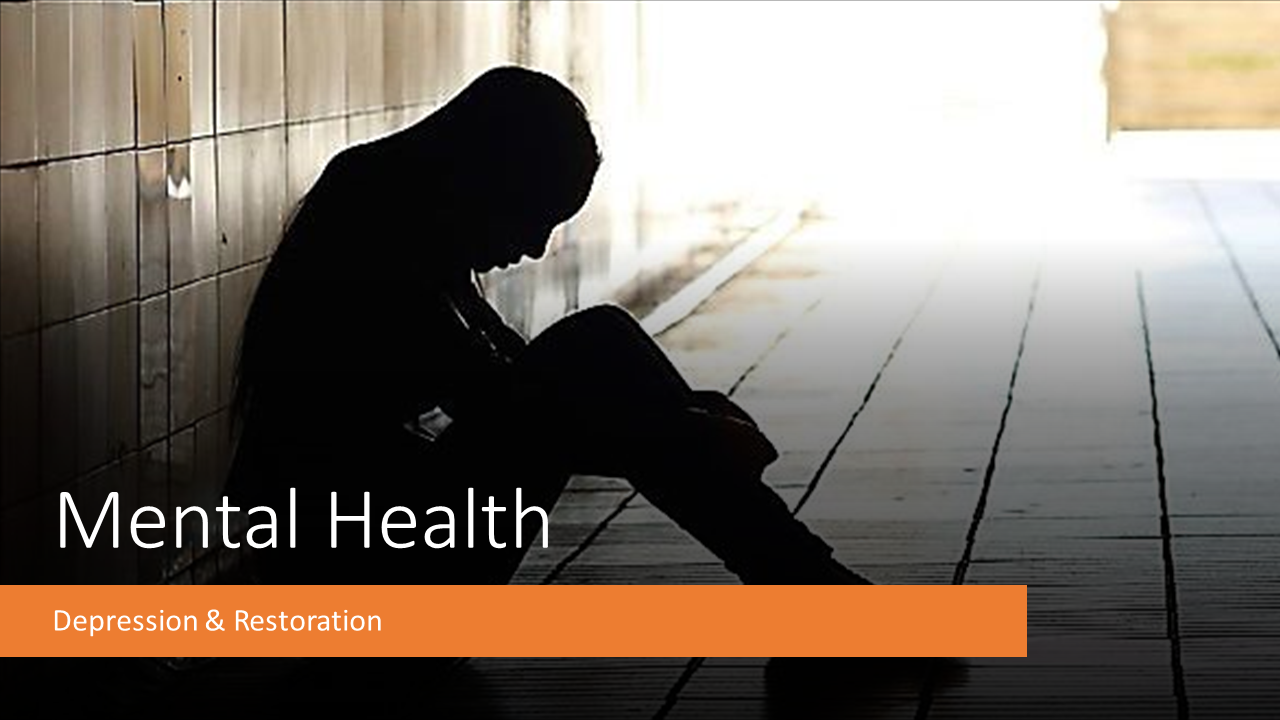 We rub shoulders every day with people who are desperate, hurting, and lonely. To be honest, many days, we might be those people, the desperate, the hurting, the lonely.

For those afflicted with depression, please understand you are not alone in how you feel. A sad truth is that many Christians suffer from depression and, either do not know it (they are miserable but do not know why) or cannot admit it because they think that it could be a spiritual problem. So, they suffer in silence hoping and praying for deliverance; but the consequences of doing nothing often results in further complication.

Clinical Depression can sometimes be caused by a physical disorder that needs to be treated with medication and/or counselling. Of course, God can cure any disease or disorder. However, in some cases, seeing a doctor for depression is no different than seeing a doctor for an injury. For this message , I need to take lot of help from online sources and bring together the word of God for our community. Let us begin..

Misconception: It is shameful to discuss mental illness openly.

Reality: Church community should be a safe environment for people to discuss mental health without judgment.

Misconception: You can always tell if someone is depressed by outward appearances or actions.

Reality: You cannot always tell that someone is depressed from how they look or act.

Misconception: Depression will go away if you pray hard enough or have enough faith.

Reality: Depression usually needs to be treated with more than prayer.

Misconception: Depression is a punishment from God.

Variation: If you feel depressed, it is because you have unconfessed sin.

Reality: Depression is not the fault of the person who is suffering. It is a difficult trial that can refine someone’s faith, but it is not a punishment for sin.

Misconception: Depression is just an excuse for laziness or not doing your “Christian duty.”

Variation: You are letting God and your church down if you are too depressed to serve or minister.

Reality: God loves you however much you do to serve Him.

Though the Bible doesn’t use the word “depression” except in a few translations and verses, it’s often referenced by other similar words, such as “downcast,” “broken hearted,” “troubled,” “miserable,” “despairing,” and “mourning,” among others.

Depression is not new to us in today’s world , it existed in the bible, there are a number of stories about godly, influential men and women of faith, who struggled and battled through dark times of hopelessness and depression.

18 On the seventh day the child died. David’s attendants were afraid to tell him that the child was dead, for they thought, “While the child was still living, he wouldn’t listen to us when we spoke to him. How can we now tell him the child is dead? He may do something desperate.”

20 Then David got up from the ground. After he had washed, put on lotions and changed his clothes, he went into the house of the Lord and worshiped. Then he went to his own house, and at his request they served him food, and he ate.

21 His attendants asked him, “Why are you acting this way? While the child was alive, you fasted and wept, but now that the child is dead, you get up and eat!”

22 He answered, “While the child was still alive, I fasted and wept. I thought, ‘Who knows? The Lord may be gracious to me and let the child live.’ 23 But now that he is dead, why should I go on fasting? Can I bring him back again? I will go to him, but he will not return to me.”

24 Then David comforted his wife Bathsheba, and he went to her and made love to her.

As we mentioned before, it is ok to be depressed but we can move out from it by the strength of God.

All these stories of these great men of God is penned down in the bible, that itself gives us the hope. David expresses his feelings, so it is alright, even for us to share and express if we are depressed. The Bible does not hide his feelings but gives us a hope and direction on how we can overcome it.

“My guilt has overwhelmed me like a burden too heavy to bear.” Ps. 38:4

“Why are you downcast, O my soul? Why so disturbed within me? Put your hope in God for I will yet praise him, my Savior and my God.” Ps. 42:11

Elijah was tired, weary , exhausted as he was running for his life from Jezebel

“I have had enough, Lord,” he said. “Take my life; I am no better than my ancestors.”

All at once an angel touched him and said, “Get up and eat.” 6 He looked around, and there by his head was some bread baked over hot coals, and a jar of water. He ate and drank and then lay down again.

7 The angel of the Lord came back a second time and touched him and said, “Get up and eat, for the journey is too much for you.” 8 So he got up and ate and drank. Strengthened by that food, he travelled forty days and forty nights until he reached Horeb, the mountain of God.

It was an Instant response from God , he sent and Angel and then we see in the later verse that God himself met him. This Bread and Water can symbolically signifying anything to us . it can be a word of God, Coming to the living water etc.

3 Now, Lord, take away my life, for it is better for me to die than to live.”

4 But the Lord replied, “Is it right for you to be angry?”

5 Jonah had gone out and sat down at a place east of the city. There he made himself a shelter, sat in its shade and waited to see what would happen to the city. 6 Then the Lord God provided a leafy plant

God showcases the concern to Jonah and teaches him from the plant. We all know the latter part of the story; God sends a worm which eats the leaf and then God demonstrates to him about the concern which he had for the people of Ninevah.

As for whether to take medication for depression, the Bible does not address that specifically. But Jesus, in His life and ministry, made it clear that healing — and seeking healing — is a good thing. He also acknowledged that the sick need a doctor (Matthew 9:12). And Paul, when he mentioned Timothy’s chronic stomach ailments, didn’t indicate he should suffer in his illness but rather take measures to alleviate it (1 Timothy 5:23).

even his own wife said, “Are you still holding on to your integrity? Curse God and die!” Job 2:9

Job literally lost everything, his fortune, children, and he had physical illness with sores in his body. He was going through a phase of depression

Even with all these, he never gave up and we see God.

12 The Lord blessed the latter part of Job’s life more than the former part. He had fourteen thousand sheep, six thousand camels, a thousand yoke of oxen and a thousand donkeys. 13 And he also had seven sons and three daughters.

Isaiah prophesied that Christ would be “a man of sorrows and acquainted with grief.” Isaiah 53:3

“And He said to them, ‘My soul is deeply grieved to the point of death; remain here and keep watch.’ And He went a little beyond them and fell to the ground and began to pray that if it were possible, the hour might pass Him by. And He was saying, ‘Abba! Father! All things are possible for You; remove this cup from Me; yet not what I will, but what You will.'”

And we all are aware that it was God’s will that Jesus must undergo the process.

And Jesus did not give up to Depression but rather he overcame it.

From all these stories, we know that God was with all of them. Each story, we read we saw how God was speaking , directing , comforting them.

“The LORD is close to the broken hearted and saves those who are crushed in spirit.” Ps. 34:18

Help is available. Don’t feel the need to try to hide your pain or struggle through on your own. Talk to a friend or counsellor or our NHC community. Seek out professional treatment and care.